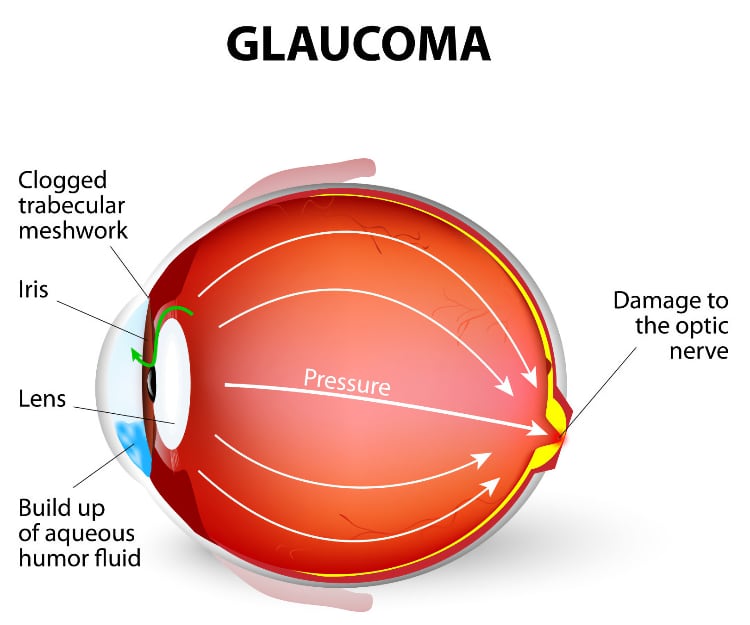 Glaucoma is a condition where the optic nerve is damaged usually as a result of increasing build-up of eye pressure. The optic nerve is an important structure which transmits the visual information from the light sensitive cells in the retina to the visual cortex.

It is not possible to repair the optic nerve once it is damaged, any vision loss from glaucoma cannot be recovered, so it’s essential to diagnose glaucoma early and once diagnosed, monitor it carefully. Glaucoma tends to affect both eyes but it tends to be worse in one eye more than other.

Treatment for glaucoma focuses on early diagnosis and careful monitoring of patients. Treatment (with eye drops, laser treatment or ultimately surgery) aims to reduce the pressure inside the eye and can prevent further damage to the optic nerve, maintaining your vision and important functions such as driving.

Glaucoma is typically diagnosed through the recognition of raised intraocular pressures during a routine eye examination. This will prompt further investigations such as visual field testing and optical coherence tomography (OCT) testing of the optic nerve, which may demonstrate evidence of glaucoma. These tests are non-invasive and crucial in diagnosing and monitoring of glaucoma.

There are usually no symptoms of a rising eye pressure but rarely certain types of glaucoma can cause halos around light, severe eye pain, redness and sudden loss of vision.

The most common type of Glaucoma is called Primary Open Angle Glaucoma (POAG) and POAG tends to develop slowly over many years. It’s caused by the drainage channels in the eye becoming gradually clogged over time. There is no pain and as patients are not aware of loss of peripheral vision, it is diagnosed incidentally. The exact cause is unknown.

Acute Angle Closure Glaucoma – an uncommon type of glaucoma caused by the sudden blocking of the drainage angle in the eye, which can raise the pressure inside the eye very quickly causing pain and vision loss.

Secondary glaucoma – caused by an underlying eye condition, such as inflammation of the eye (uveitis) or trauma

Childhood glaucoma (congenital glaucoma) – a rare type that occurs in very young children, caused by an abnormality of the eye

Who is at risk of glaucoma

People with family history of glaucoma have an increased risk of developing glaucoma. Certain ethnicities also increase risk of glaucoma such people from African, Caribbean, or Asian origin.

Glaucoma is also more common as we get older. Other risk factors include having a high eye pressure, presence of a thin cornea, diabetes, trauma, being very short or long sighted and use of certain medication such as steroid eye drops.

How is Glaucoma Treated

The treatment of glaucoma can vary immensely, and ultimately this will depend on the stage of glaucoma at presentation. In the first instance, when glaucoma is diagnosed, usually we would recommend starting certain drops to use in the eye, to reduce the pressure.  By reducing the pressure within the eye, this can prevent cell death, and hence preserve visual field.

Laser treatment – in some cases laser can help to reduce eye pressure and in other cases laser aims to open up the blocked drainage tubes or reduce the production of fluid in your eyes.

Surgery – to improve the drainage of fluid.

The treatment of glaucoma is constantly changing.  This can be in the form of new drops becoming available, as well as new techniques such as minimally invasive glaucoma surgery (MIGS).  It is also becoming increasingly popular to use techniques to control intraocular pressures at the time of having cataract surgery if glaucoma is uncontrolled e.g i-stent.

If you would like more information about glaucoma, and your treatment options, do get in touch here.