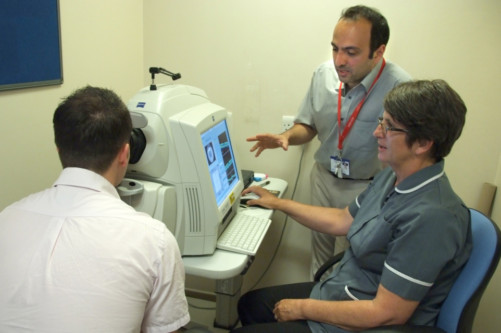 OF ALL the senses, sight is the one people would hate to lose most.

The impact going blind can have on someone’s day-to day life is almost immeasurable.

For that reason, the work done on eyes at the DGH is one of the most demanding. Saving a patient’s vision may not save their life, but is does a lot to maintain their quality of life.

One of the most common conditions dealt with at the DGH is age-related macular degeneration (AMD).

Usually affecting older adults, it can result in a loss of vision in the centre of the eye. Someone with AMD who is left untreated will often retain their peripheral vision, but face each day with a cloudy blob running through the middle of their sight.

It comes in two forms, wet and dry, and, as consultant ophthalmologist Shahram Kashani (pictured) explained, the key to stopping the problem in its tracks is catching it early.

“We scan eyes using a special machine and try to get people scanned within one to two weeks of being referred to us.

“Once people come in we can often get them turned around within two or three hours and, if there is a problem diagnosed, can offer to start treatment there and then. Not everyone wants to start straight away but we do recommend it because once we start treatment we have an excellent chance of stopping the condition deteriorating.”

He isn’t joking. Once treatment starts around 90 per cent of patients at the DGH will experience stable eyesight and, in some cases (30-40%), vision can improve.

Treatment involves injections into the eye and every patient will have at least three straight off separated by a monthly interval. From then on it depends very much on the condition but most people return for regular sessions – meaning the number Mr Kashani and his team have to deal with is going to get bigger and bigger each year – placing more and more demands on the service.

Mr Kashani has already started running extra sessions on an evening and Saturday day time to cope with the extra demand and he is hopeful of securing a second scanner to alleviate potential bottlenecks.

“The machine we have is brilliant,” he said. “It sorts through hundreds of results and scans and highlights the ones we need to prioritise, meaning we can focus on getting treatment quickly to the those who most need.”

A second machine would cost approximately £65,000 but would be well worth it in the eyes of Mr Karshani, who has helped revolutionise the way the department works in the relatively short time he has been on the south coast.

During the Herald’s recent visit, Mr Kashani was quick to talk up the hard work of his colleagues and stressed it was very much a team effort, with the consultant also training others to use the state-of-the-art kit from outside the unit to help ease the workload during busy times.

But, he revealed, the biggest single leap in the treatment of AMD has been the emergence of medication which can halt what can be rapid loss of vision.

“Before 2008,” he explained, “there was nothing you could do about AMD on the NHS. Drugs were still being tested so the only way to get them was private and pay – or get on a clinical trial.

“If you couldn’t do that, you had to pretty much just put up with it and probably end up going blind. Now the medication is available on the NHS we can help so many. In fact, we are seeing people who have had it in one eye untreated now getting it in their other eye coming in because now we can do something about it.”

However, at £1,000 a vial (a single injection), the medication does not come cheap and obviously puts a financial strain on the service.

For that reason it is only available to people suffering from less than 70 per cent vision. It is a tough rule, admits Mr Kashani, but far more preferable to that of just four years ago.

“Of course we would like to be able to help more but it is a matter of money. Those who are not bad enough yet are checked regularly so we can keep an eye on their condition and we start treatment as soon as they fall below 70%.

“Losing sight can have such a huge impact on people’s lives. It can mean the difference between someone keeping their independence at home or having to have extra care or go into a home.

“To help people keep their sight is wonderful. Losing vision can really hit a person’s mental health as well as their ability to cope on a day-to-day basis.” What can people do to help themselves? The public message in this case is much like any other. “We know for sure smoking is a definite positive correlator to AMD, so people should avoid that,” warns Mr Kashani.

“There are multi vitamins which people can take which can prevent the spread of it and anyone worried should eat lots of green and yellow vegetables.”

Not carrots then? “No,” laughs Mr Kashani, “there isn’t any truth in that rumour. Eating carrots won’t improve your eyesight, but at the same time, it won’t do you any harm. Just don’t expect to be able to see in the dark.”

Anyone experiencing any blurring of vision or any unexplained greying appearing in their sight should contact their GP or optician as soon as possible.